In case you were concerned that the Internet was just a pile of useless information (for example, this blog), I learned something verrry useful while wasting time looking at a real estate listing: apparently, the right of assembly has been rescinded. In a listing of recent police activity, I saw the following: 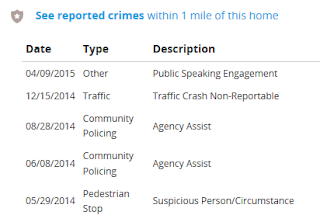 Now, there may be other explanations:

Email ThisBlogThis!Share to TwitterShare to FacebookShare to Pinterest
Labels: constitutional law, making sure this blog lives up to its name, right of assembly

I post good things in the Boston area at http://www.thoughts.com/joshlubarr